”We invite you to walk with us in a movement of the Australian people for a better future.” – Uluru Statement from the Heart

Walking with or alongside frequently excluded people and communities is an admirable sentiment. The concept holds even more weight when those communities extend the invitation to journey together.

In the case of the Uluru Statement from the Heart, the invitation for non-Indigenous people to ‘walk with’ First Nations highlights a profound and undeserved generosity underpinned by their abiding commitment to community and kinship. Over the past 234 years, First Peoples have rarely been extended the same spirit of generosity.

Working in the not-for-profit sector, I have often discussed the virtues of ‘walking with’ or ‘beside’. Walking beside First Peoples, victims of violence and abuse, refugees and people seeking asylum, or marginalised and vulnerable communities is a common catch-cry.

I have also witnessed and participated in three broad ways of working in, with or for diverse communities.

The people and communities most impacted by injustice and external decision-making should be directly involved in framing and leading strengths-based responses and solutions. It should increasingly be our goal to support this kind of work and organisations and movements such as Original Power, IndigenousX, National Refugee-led Advisory and Advocacy Group, and Action for Afghanistan.

The standard approach is that community services and advocacy are built around resources, expertise and capacity to scale. Agency-led practices can be powerful and inform positive change when directed toward facilitating, amplifying and investing in community-led endeavours. The risk is that agency-led can become or operate as a cover for the third way of working.

03. Co-opted or self-centred (aka Stolen)

No organisation or institution would admit to this way of working, but it’s prevalent, if not endemic. So-called “civil society” leaders consistently platform themselves rather than centring the people they exist to serve and support. Agencies and organisations, either in the interests of self-preservation, expediency or because it’s the only way they know, push people with lived experience to the fringes. I have been guilty of this, and we’re so used to bad behaviour that we barely notice it.

We see it in the wake of almost every major humanitarian crisis – large and well-funded organisations clambering over each other to centre themselves in the conversation.

There are almost no ‘voiceless’, just those on whose behalf we would prefer to speak.

At this point you may be expecting me to posit a fourth way. What about co-design or collaborative approaches? What about ‘walking beside’?

I would argue we don’t know how.

The dispossessed understand what it might mean to walk beside. First Peoples are often the strongest supporters of refugee and asylum seeker rights because they live with the reality and impacts of dispossession. Their ongoing struggle for sovereignty is aligned with and tied to the rights of people seeking safety and belonging.

For everyone else, paternalism and colonial mindsets are so pervasive that we (I) only understand walking beside from a position of power and privilege.

Walking beside, we cannot help but set the pace or alter the direction.

Walking beside may work in a bubble devoid of generational racism, dispossession and injustice. But that bubble is a myth.

My simple thesis is this: before we walk beside, we must walk behind.

Before I can walk beside, I need to learn to walk behind and put the power and process into the hands of people that I’m supposedly trying to support.

As someone who has long endeavoured to do good, make positive change and be an ally, and often failed miserably, I’m unsure how to go about it. However, here’s what I’ve committed to doing in my personal and professional life:

Where we choose to spend our money (if you’re in a position to do that) is a statement of what we value. The reality is that I live on stolen land, I benefit from stolen land, and I need to put my money where my mouth is. More than that (and this is important), I should not control the money I contribute. As such, I’m directing at least 1% of my annual income to Indigenous-led and owned organisations and initiatives that address justice, healing and self-determination for First Peoples. There are various ways to do that, but here’s an example and a bit about what that means.

It is not my role or intent to critique the Uluru Statement from the Heart other than to note its purpose and call to action. My place is to sit at the feet of First Nations Elders, understand their struggle and amplify their voices. Especially by learning from the wisdom of fierce Aboriginal and Torres Strait Islander women who bear the wounds of injustice and fight daily for the rights and sovereignty of their families and communities.

In 2017, Prime Minister Malcolm Turnbull dismissed the Uluru Statement from the Heart with no recourse or debate. The rallying cry for ‘voice, treaty and truth’ was barely given a moment’s consideration.

If you are an ‘ally’, ‘supporter’, or’ friend’ of First Peoples or forcibly displaced peoples, I encourage you to consider what it might take to ‘walk behind’.

With humble hearts and a commitment to change, I believe we can realise healing, justice and a more generous future for all.

This article by CEO Aleem Ali was originally published here. 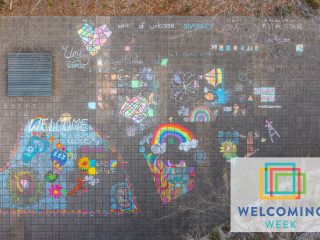