Why having campaigns led by people with lived experience, is integral to creating social change.

It’s a Friday evening in Sydney’s outer western suburb of Lidcombe. One by one, a dozen university students gather in the lounge room of a well-known family in the Tamil community. In between their end of year exams, they lean against each other and sit quietly, waiting to hear from Dorothy Tran, the NSW organiser of Amnesty’s ‘My New Neighbour’ campaign. For many of the young second generation migrants gathered, this will be the first social change movement they have ever been involved with. Many of them have come to Australia seeking refuge with their parents and have now settled into one of the high-rise apartment buildings that lined the streets of Sydney’s west.

’It’s our time to get involved’ offers 21-year-old law student, Ananth Kumaralingam who was raised in Homebush, Sydney.

They want to get involved because they know what being included means. They want to offer welcome and share the benefits of their new home. ‘My New Neighbour’ is focused on unlocking the welcoming spirit that exists within these communities. Beyond brutal refugee policies, Australia remains a welcoming country.

My New Neighbour is calling on our government to expand and improve its refugee sponsorship program. The program is currently small and poorly structured, failing to allow refugees to contribute to our country as so many have done before. The significance of the ‘Community Support Program’ is not lost on the young Tamil Australians. That night participants learnt about tangible ways to assist family, friends or community members who were left behind in Sri Lanka. Many of their relatives and friends have been waiting for years, not knowing when they will be assessed and win the lottery of a place in Australia’s humanitarian intake program. It’s a guilt that weighs on the conscience of many of us who have come and found safety here. Many of our people didn’t. There is interest here. It’s personal.

Ali Noori spent years in Indonesia, waiting to know when he could come to Australia. When he finally arrived in Canberra, Ali found friends waiting for him and generous offers of practical assistance extended by strangers. Ali experienced first-hand, the power of community-led and neighbourhood driven efforts to make his life in his new home more comfortable. Now, through ‘My New Neighbour’ Ali speaks to Australian audiences about the power of goodness. When Ali shares his story with local residents in regional towns like Braidwood, New South Wales, people are moved to tears.

In Wagga Wagga where Amnesty’s ‘My New Neighbour’ campaign launched in March 2018, political refugee from Zimbabwe, Felix Machiridza reflects on the fond memories of community support and love he received from his neighbours upon arrival.

’Community organisations worked with me, not for me, to make it possible for me to reunite with my children. I was creating my own destiny, but their help supported rather than drove my own work,’ reflects Felix.

Sponsoring his own children to reunite with him cost many thousands of dollars: ‘I couldn’t do it without them, but I must stress that the journey was mine to walk—but they walked it with me’, Felix says.

For many refugees joining more than sixteen thousand Australians to call on the Australian Government for an expansion and improvement of the refugee community sponsorship, the outcome is as important as the movement it is building. For several of us, it’s the first time we are harnessing the strength of our personal stories to advocate for ourselves and others like us. It’s happening with us, not for us or to us.

Reclaiming campaigns executed in our name is crucial. It ensures the messages are right, and the messengers are us. It’s important because it reframes how we identify ourselves.

We are your neighbours; we are your teammates. We are your friends and colleagues. Stand with us and help us claim back this movement for change in our lives.

In a café in Canberra, a South Sudanese refugee by the name of Abraham puts it like this:

‘We are not victims, we are survivors. We are people who have come here to this place, and we are playing a role in building community here.’

The world has seen the impact of the Black Lives Matter movement in the US, where the campaign is led by the people directly affected by the issue. The ‘My New Neighbour’ campaign is just one example of how this can work in Australia.

From the former refugees turned advocates and social change activists now advising Amnesty’s refugee campaign, to the community groups getting on board at a grassroots level, this is an effort that is being designed, led and implemented by people with lived experience.

We’re at the start of something significant. We have had some wins, but there’s a lot more work to be done. We will need help of those who are not refugees but people for whom the experience of displacement is shared. We are seeing second, third and even fourth generation migrants get behind us as they too were once new neighbours in Australia.

Earlier in 2018, the Chair of the Ethnic Community Council of Victoria and Mayor of Whittlesea, Kris Pavilidis didn’t even hesitate to lead the way when meeting to discuss the campaign over a coffee at her local café.

Later that very day, Whittlesea would become the first city council to make the call to the Federal Government to expand and improve refugee community sponsorship. Earlier in 2018 the Western Bulldogs became the first major sporting team to throw their weight behind the campaign.

Movement building requires a lot of work, and as refugees we can’t do it alone. As people with lived experience we need allies everywhere to help us—companies, institutions, governments and friends in the community. People who respect the need for us to lead this work but will walk alongside us.

Allies can work in different ways, across communities where different strengths live, and feed into a body of work across the country. Over the past 6 months, as the campaign has just started, 29 local governments across WA, NSW, Tasmania, Queensland, SA and Victoria have joined the ‘My New Neighbour’ movement.

Regional centres like Albury-Wodonga and Wagga Wagga, urban fringe areas and suburbs like Whittlesea, Monash and Maribyrnong as well as inner city areas are all contributing. Local councils operate in landscapes with several examples of social change initiatives, shifting the attitudes of people to their new neighbours. The efforts of Victoria’s Darebin Council’s in Melbourne’s inner north reflected the groundswell of support coming from refugee and migrant diaspora communities.

Suriyan Nalliah, local resident of Darebin, refugee advocate and chair of the Darebin Ethnic Community Council heard about the ‘My New Neighbour’ campaign and is working with his group to call on his Council to lead a motion, joining the several others that had already done so.

Abdi Aden, a Somalian refugee, published author, and adviser to the ‘My New Neighbour’ campaign, spoke about what sharing his story meant to him.

‘I was once a new neighbour but these days I am interested in building neighbourhoods. Community led solutions to help our new neighbours, like community sponsorship, is something that can make a big difference to a lot of our people. How we tell that story is important and who listens, is also important.’

Community leaders like Akec Chuot, AFL player in the women’s team of Carlton Football Club embraces the actual wording and framing of the campaign.

‘I hate that word refugee. It is being misused and I dislike the box it puts me in. I am your new neighbour. I was sponsored and others can be sponsored also’.

The importance and integrity of refugee led campaigns is not lost on Farid Ashgari. In Melbourne’s inner east, Camberwell Grammar School offered a scholarship to Farid who arrived in Australia by boat, as an unaccompanied minor from Afghanistan. Farid approached his school asking them to come on board ‘My New Neighbour’ and the school students, through their ‘InterAct club’, responded warmly, becoming the first school in Australia to join Amnesty’s campaign.

‘The school listened to us. They supported us. They got behind us. The students donated generously to a resettlement program immediately… I felt like we had a voice, and it was being listened to, and making an impact. My community was coming with me, rather than just using me when my story was convenient’.

Now, in 2019, we are making change happen, and refugees are now more than ever turning to our political leaders to show us that our voices are being heard—‘we’ being those of us who have the most to gain from social change, and our friends who stand with us. 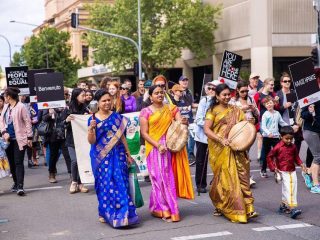 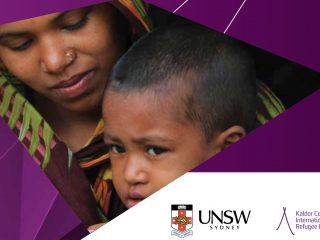